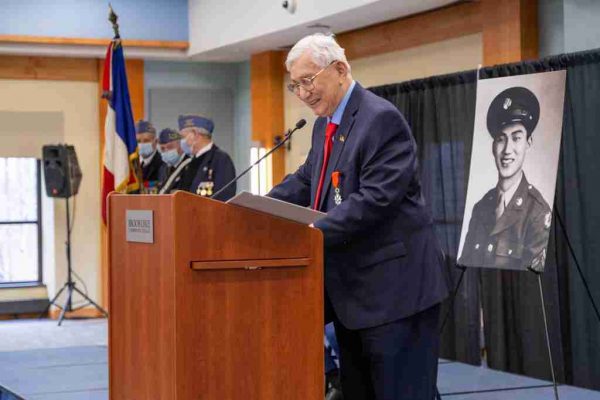 The Consul General of France in New York, Mr. Jérémie Robert, presented the insignia of “Chevalier dans l’Ordre National de la Légion d’Honneur” (Knight in the Order of the Legion of Honor) to Mr. Chan.

“I am very humbled to bestow the Legion of Honor upon Mr. Edward L. Chan, whose bravery will never be forgotten. This prestigious distinction is an expression of the deep gratitude that the French people have for the Americans who contributed to the liberation of France during World War II.”

Commissioner Director Thomas A. Arnone, Elodie Massaro of the American Society of the French Legion of Honor and Mr. Edward L. Chan also made remarks at the ceremony.

“On behalf of the entire Monmouth County Board of County Commissioners, I would like to present Mr. Chan with a Proclamation in honor of not only the French Legion of Honor medal he will receive today, but also for the United States Congressional Gold Medal that he was awarded in 2020,” said Commissioner Director Arnone. “Mr. Chan was unanimously selected by the Chinese American WWII Veterans Recognition Project—Congressional Gold Medal Review Committee to receive this honor in recognition of his dedicated service during World War II. The entire Monmouth County Board of County Commissioners congratulates Mr. Chan for his well-deserved medals and international recognition he has received.”

“To this day the Legion of Honor has remained the premier distinction of France and it is that same magnificent medal hanging from its red moiré ribbon that Emperor Napoleon distributed personally to each recipient more than two centuries ago. He created the medal in 1802 in order to recognize the men and women deserving France’s highest gratitude for their civilian or military accomplishments,” said Elodie Massaro. “Mr. Chan exemplifies the very reason why Napoleon Bonaparte founded the Legion of Honor; he is a true hero whose actions during WWII contributed to help free France and he deserves our never-ending gratitude. We are proud to add him to our Society’s roster.”

“It was a great honor to serve my Country and to support our Allies during World War II. I am happy to receive this prestigious French Legion of Honor Award today” said Mr. Chan. “It will be a moment that I will always cherish.”

The ceremony was live-streamed and may be viewed on the Monmouth County Government’s Facebook and YouTube Channel.

Disclosure: Some of the links in stories on this website are affiliate links. This means that, at zero cost to you, I will earn an affiliate commission if you click through the link and finalize a purchase.
Share
Facebook
Twitter
Pinterest
WhatsApp
Previous article
The role of pharmacists is changing, here’s what to know
Next article
Lemon Bundt PEEPS® Cake
RELATED ARTICLES
Local News